Greetings Bloggers! Hope everyone’s week is going well. Lately, I’ve been hearing a lot of buzz on the debate between GooglePlus and Facebook so I wanted to put my 2 cents on here as well. As we all know, Facebook is the world’s largest social networking site and Google is the world’s largest search engine, so it doesn’t surprise me that competition has become fierce as soon as Google came up with it’s unique (but strangely similar to Facebook) social networking site.

With Google+ features like: hangouts, circles, larger images for viewing, and huddles; I have to admit Google+ dominates. However, strangely enough I am seeing many “copy-cat” features from Facebook including: the overall design, stream aka news feed,  and the plus button oddly replacing the like button. With these similarities and differences, I truly believe people will have to decide on one social networking site to devote majority of their time to- I mean, come on now, how many social networking sites can a person really manage? I have to admit I find myself logging on to twitter at least 10 times per day and Facebook could vary from 20 plus times-hey my job requires me to be on there! 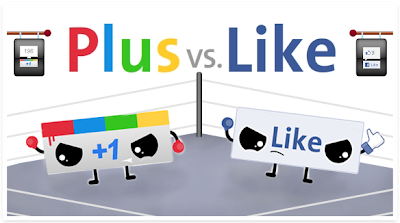 With all this said, I feel that the ultimate decision of choosing one social site over the other will come down to rankings. As a Google AdWords Certified professional, I can understand the importance behind ranking high on specific search queries. If Google+ designs everything as they hoped, I do believe it will create winners and losers in the publishing world, making Google +1 buttons actually matter. Before that becomes a reality though, it will require an enormous increase in users. A report says that Google+ currently has about 20 Million Users- not bad considering they just recently became public, BUT they still have a long way to go to catch up to Facebook’s 800 Million Users.

In conclusion, Google+ is a bold and sensational attempt at social. There’s a reason why Google calls this a “project” rather than a “product” – they don’t want people to think of this as the final product, but as a constantly-evolving site as more and more great ideas are born. In the mean time, it doesn’t surprise me if Mark Zuckerberg feels like he is sitting on the hot seat as he continues to hear rumors of Google+ far surpassing FB potential. All in all, Google+ is a solid social networking site. But I’m not going to call it a Facebook killer or a game-changer, just yet. If only Google can persuade users to log-in every day, it will become a winner, hands down. In the mean time, however, Google will have to do even more to provide a truly compelling alternative to Facebook. In the time being, Google+ cannot compete with the king of social, but Google does not seem to be in a hurry to take on Mark Zuckerberg’s baby just yet.

What are your thoughts? Feel free to comment by clicking on the white bubble at the top right, I’d love to hear from you! Also, if this topic interests you- we will be having a Webinar on September 6th at 1 PM EST to discuss Google+ in more detail! More info on that to come! Follow me on Twitter if you’d like to chat there @Mish_Lynn

Signing out- Have a wonderful rest of your week!